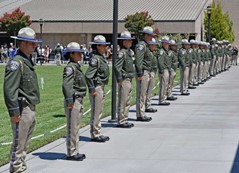 A determined group of California Highway Patrol cadets made it to graduation this week after a year of pandemic-related delays and challenges. The long-awaited graduation of California Highway Patrol Cadet Training Class I-20 took place on Friday at the CHP Academy in West Sacramento. The CHP’s 119 newest officers — 18 women and 101 men — received their badges following a swearing-in ceremony 75 weeks after their training began. Lake County is among the many counties included in the CHP’s vast Northern Division. A total of six new officers have been assigned to the following Northern Division offices: one, Garberville; one, Humboldt; two, Willow Creek Resident Post; and two, Garberville, Laytonville Resident Post, said CHP spokesperson Jaime Coffee. Traditionally, cadet training at the CHP Academy takes place over 29 weeks. However, a little more than a month after arriving at the academy on Feb. 10, 2020, safety precautions necessitated by the COVID-19 pandemic led to the closure of the live-in training facility in West Sacramento. While away from the academy, cadets were assigned to CHP Area offices throughout the state to observe a wide variety of activities and tasks uniformed officers routinely perform, enhancing the knowledge they had gained in the classroom. Cadets also participated in online learning for the first time. “To say these cadets have been well-trained would be an understatement,” CHP Commissioner Amanda Ray said Friday. “Today’s graduates persevered through challenging circumstances over a lengthy period of time, demonstrating their commitment to serving the people of California.” At the CHP Academy, cadet training starts with nobility in policing, leadership, professionalism and ethics, and cultural diversity. Cadets also receive instruction on mental illness response and crisis intervention techniques. The training also covers vehicle patrol, accident investigation, first aid, and the apprehension of suspected violators, including those who drive under the influence of alcohol or drugs. The cadets also receive training in traffic control, report writing, recovery of stolen vehicles, assisting the motoring public, issuing citations, emergency scene management, and knowledge of various codes including the California Vehicle Code, Penal Code and Health and Safety Code. Upon graduation, these uniquely trained cadets will be reporting for duty to CHP Area offices throughout the state. The mission of the CHP is to provide the highest level of safety, service and security.