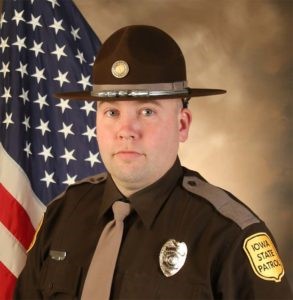 Following the announcement made by Iowa State Patrol, Governor Kim Reynolds issued a statement thanking Trooper Benda for his service.

"I'm deeply saddened to learn of the tragic passing of Iowa State A patrol Trooper Ted Benda. Kevin and I join Iowans in mourning the loss of this dedicated servant and wee keep his family, friends and fellow brothers and sisters in uniform in our thoughts and prayers as they cope with this devastating loss. Tragic events like this are a somber reminder of how precious life is and of the unwavering, selfless sacrifice our brave men and women in law enforcement make every day," said Gov. Reynolds.

Congresswoman Ashley Hinson also sent her condolences to the family and friends of Trooper Benda.

"I am devastated that Trooper Ted Benda has passed away. Trooper Benda has deep roots in Waukon and has dedicated his professional life to protecting our community through his service with the Iowa Department of Public Safety and as a State Trooper. Matt and I are sending our deepest condolences and prayer to his family, friends and fellow law enforcement officers during this time," said Congresswoman Hinson.

Benda joined the Iowa State Patrol in 2016. At the time of his passing, he was working out of District 10 in Oelwein.

"All I have to say is our prayers are with you and if there's anything we can do, as a community, we will do it," said Howell.

Trooper Benda is the second Iowa State Patrol officer to pass away this year. In April, Sargent Jim Smith lost his life in the line of duty.