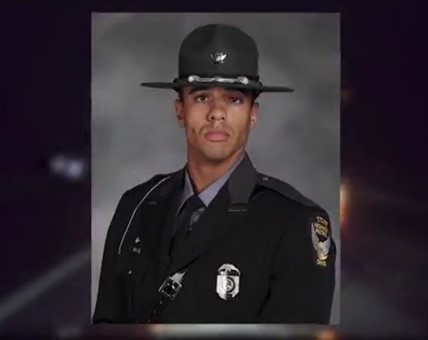 An East Tennessee State University student who found herself stranded while on her way home to Northeast Ohio for Thanksgiving is paying tribute to an Ohio State Highway Patrol trooper, who made sure that she got to her destination safely.

On a whim, Elise Gaffney, an ETSU student, decided to take her dog Hank on a road trip to surprise her family in Hudson with a visit for the holiday.

She made it all the way to Canton, Ohio, but her heart sank when she heard an unusual noise as she was driving northbound on Interstate 77 at 1:45 a.m.

“My back passenger tire exploded, so you know it was very cold, very dark, very nerve-racking; I was exhausted,” she said.

Fortunately for Elise and Hank, a trooper with OSHP’s Canton Post saw Elise’s disabled minivan on the side of the highway and pulled over.

“I honestly didn’t really know what to expect. I didn’t know that an officer could or would change a tire in the first place,” she said.

Trooper Evan Hill tried to change the tire for Elise but discovered her spare tire was rusted to the bottom of the minivan. The trooper summoned a tow truck driver to help, but he was unable to loosen the rusted spare tire. However, he agreed to tow the minivan to a garage, and that’s when Trooper Hill offered to drive Elise Gaffney and her dog to her parents’ home in Hudson, some 40 minutes away.

“I just felt that he went above and beyond,” she said. Elise says after Trooper Hill made sure that she and Hank got to Hudson safely, they celebrated a Thanksgiving holiday that she and her family will never forget.

Gaffney says she wanted Trooper Hill to be recognized for his act of kindness but realized that she did not know his name or have his badge number. So she decided to call the post commander in Canton to let the highway patrol know how grateful she is.

“You know any number of really bad things could have happened and they didn’t, and I was safe and Hank was safe, and it’s reassuring to know that there are people who take care of other people,” she said.

Original story can be found at: https://www.wjhl.com/news/local/ohio-state-highway-patrol-trooper-makes-sure-stranded-etsu-student-gets-home-for-thanksgiving/

Copyright 2021 Nexstar Media Inc. All rights reserved. This material may not be published, broadcast, rewritten, or redistributed.