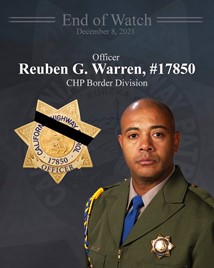 A California Highway Patrol officer who was also a veteran, died last week as "a result of complications from COVID-19," the state highway patrol announced Monday.

Officer Reuben Warren, 53, was identified as the CHP officer who died on December 8. He is survived by his wife, son and two daughters. "It is with great sadness that I share news of the loss of a member of the CHP family," said Commissioner Amanda Ray on Twitter. "Officer Reuben Warren was a true public servant … He will be missed deeply by all who knew him." Warren joined the highway patrol in 2005 and had been based in Southern California. He had worked with the Santa Ana, San Diego and Border Division offices, the CHP said. "Jennifer and I were saddened to learn of the death of Officer Reuben Warren," said Gov. Gavin Newsom in a statement. "We send our deepest sympathies to his family, friends, and the entire CHP family for their loss. Officer Warren’s lifetime of service and sacrifice will forever be remembered." Flags in the Capitol will be flown at half-staff to honor Warren. Warren had also served in the Marine Corps and worked for the San Diego Police Department.