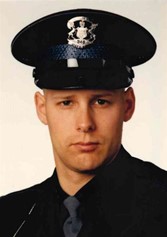 Todd Lawrence Leveille, 53, of Port Huron Township, died Thursday, December 9, 2021. He was born February 17, 1968 in St. Ignace to Ara J. and the late Lawrence “Lumpy” Leveille. Todd graduated in 1986 from LaSalle High School in St. Ignace and Lake Superior State University with a bachelor’s degree in Criminal Justice. After graduation he worked for the St. Ignace City Police and Ingham County Sherriff Department before graduating from the Michigan State Police Academy in 1995. Todd worked as a Trooper for over 25 years, running the D.A.R.E program early in his career, making the rank of Sergeant and earning a Trooper of the Year award in 2005. Todd’s number one priority was his beautiful daughter, Abby, and he especially enjoyed their Sunday mornings together at church and then Mama Vickie’s. He liked golfing with his buddy, Dale; playing hockey; boating; and thirsty “Thursday Thursdays” at Casey’s and the Vintage Tavern. Todd’s main goals in life were to keep people safe and make people laugh. He is survived by his daughter, Abigail “Abby” Leveille, and her mother, Kristy Leveille; his mother, Ara J. Leveille; two sisters, Theresa France and Tammy Fitzpatrick; two brothers, Troy Leveille and Travis (Maria) Leveille; ten nieces and nephews, Kristina (Justin) Belmont, Ronnie (Trista) France, Alex France, Kara and Kacey Fitzpatrick, and Trevor, Dylan, Cassie, Caleb, and Cameron Leveille; his neighbors and best friends, Matt, Charity, Brendan and Morgan Moeller; and his faithful sidekick, “Buddy”. He was preceded in death by his father, grandparents, and good friend, Nelson P. Sturdevan. Visitation will be from 12:00 noon to 4:00 p.m. and 5:00 p.m. to 8:00 p.m. on Wednesday, December 15, 2021. A rosary will be recited at 7:45 p.m. Abby would love for anyone who would like to share a favorite memory of Todd to do so on cards provided at the visitation or on the funeral home website. The Funeral Mass will be held at 10:00 a.m. Thursday, December 16, 2021 at St. Mary Catholic Church, Port Huron. Sgt. Leveille will lie in state from 9:30 a.m. until the time of the Mass. A livestream will be available on Todd’s obituary page of the funeral home website. Burial will be in Mt. Hope Cemetery, Port Huron. Pallbearers will be Michigan State Troopers from the “Todd Squad”. Memorial contributions may be made to the Thin Blue Line of Michigan or Mid-City Nutrition. Arrangements are by Karrer-Simpson Funeral Home. To send condolences, visit karrersimpson.com