I am brought to tears; Foundation pays off mortgage on Hanover home for family of state trooper killed in 2015 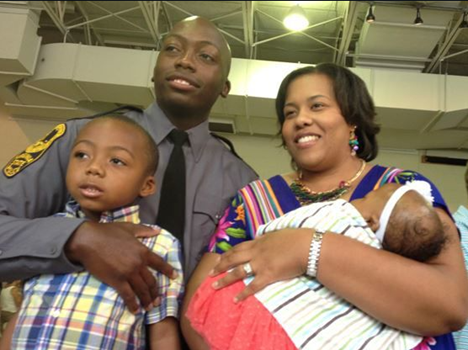 A foundation dedicated to honoring and supporting first-responders, veterans and their families announced Friday that it has paid off the mortgage on the Hanover County home where Virginia State Police trooper Nathan-Michael Smith lived with his family before he was killed on duty while responding to a crash in Prince George County in 2015.

In observance of Independence Day, the Smith home is one of 19 owned by fallen first responder families across the country for which the Tunnel to Towers Foundation recently satisfied the mortgages on the houses.

A ceremony attended by state police and Tunnel to Towers representatives was held last week at the Smith family home to celebrate the occasion, which included a ribbon cutting and ceremonial key to the house.

“I am brought to tears thinking about our home being paid off by the Tunnels to Towers Foundation,” Smith’s widow, Jennifer, said in a prepared statement. “This was our first home together, a home we worked and prayed to get for years. When Nate passed it was devastating that he wouldn’t get to live in the dream house we worked so hard to purchase.”

“Being able to say I don’t have the burden of paying a monthly mortgage as a single parent is breathtaking,” she added.

Smith, 27, who left behind two children, was fatally injured in a crash on Sept. 21, 2015, while rushing to render aid in a fatal wreck that occurred minutes earlier in Dinwiddie County. Smith and other troopers scrambled to the earlier crash after hearing radio traffic that made them believe a trooper was in distress, in addition to the crash victim, state police said at the time.

Smith lost control of his Ford Taurus patrol car and ran off the left side of the Interstate 295 exit ramp to Interstate 95 in Prince George. His cruiser overturned onto its side and struck several trees before coming to a rest. He died later that day at VCU Medical Center.

Smith was the department’s 61st sworn employee to be killed in the line of duty.

Smith’s home is the third belonging to a Richmond-area first responder killed in the line of duty to be paid off by Tunnel to Towers in less than three years.

In early December, the foundation paid off the mortgage on the Powhatan County home where slain State Police special agent Michael Walter once lived with his wife and three children. Walter, 45, was shot on May 26, 2017, while patrolling in the Mosby Court public housing neighborhood with Richmond officer Chris Duane. He died the next day.