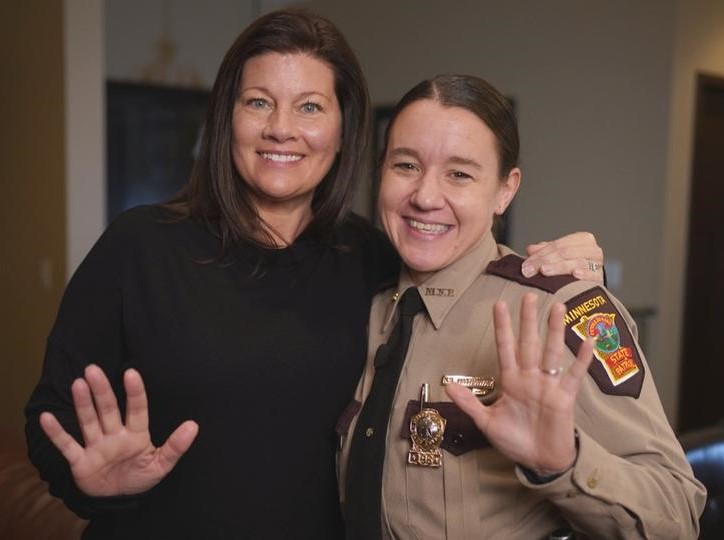 Trooper Kristie Sue Hathaway arrested Amy Martin and took her to jail; their encounter could have stopped there, but it didn't

DELANO, Minn. — Ten years ago, a trooper noticed a car that was weaving, speeding up and slowing down in the middle of the afternoon on a busy highway. After approaching the car, the trooper noticed the driver had watery, glassy eyes, as well as an open bottle of vodka in the center console of the vehicle. The driver's daughter – just two years old at the time – was in the backseat.

Trooper Kristie Sue Hathaway arrested Amy Martin, the driver, and took her to jail. Their encounter could have stopped there, but it didn't.

"I remember saying right before [Martin] got booked in, 'Please don't do this to your daughter. She needs a mom. I know because my mom left when I was 10,'" Hathaway, who shared that both of her parents struggled with alcohol, recalled.

After Martin was booked into jail, she promised Hathaway one thing: she would visit the trooper in a year – sober. "I didn't think I'd hear from her," Hathaway admitted.

However, exactly one year later, Martin surprised Hathaway at work – complete with her hard-earned one-year sobriety medallion. Now, every year, Martin delivers her new sobriety medallion to Hathaway. And, in return, Hathaway gives Martin the medallion from the previous year back.

"There have been times when you kind of wonder like, 'Why am I in this job?' It reminds me of why. It gives me hope," Hathaway said.

Over the years, Hathaway and Martin have continued to cheer each other on. Martin supported Hathaway as she ran the Twin Cities Marathon, they attended each other's weddings and Hathaway was invited to Martin's daughter's school to talk about her law enforcement career, according to the report.

"If this wouldn't have happened, there is no question in my mind, I would not be here today," Martin said. "She saved my life."