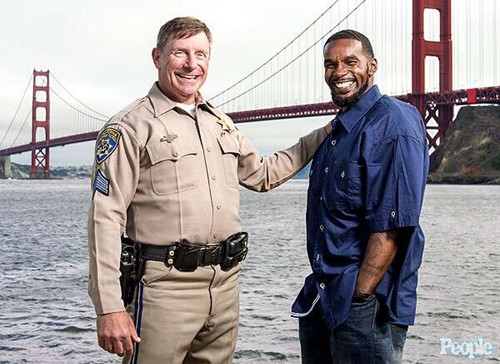 More than twice a month, on average, those who’ve lost all hope come to San Francisco’s Golden Gate Bridge, climb over the railing and, tragically, plunge 220 feet into the Pacific Ocean to end their pain.

That number would be higher, if not for California Highway Patrol Sgt. Kevin Briggs, nicknamed the “Guardian of the Golden Gate.” Since 1994, through sheer compassion and expert listening skills, Sgt. Briggs has helped convince more than 200 people on the precipice of death not to take their lives (so far, he’s only lost one).

“People who come to jump don’t necessarily want to die,” explains Briggs, 50, who calmly introduces himself just a few feet away to the despondent person, often standing for hours in bone-chilling wind or heavy fog.

“I try to find out what brought them to this point,” says Briggs, a cancer survivor and father of two boys. “If I can get them to break down, that’s a good sign, it shows they’re listening and thinking. If someone says they have no plan for tomorrow, I say, ‘OK, let’s make one.’ ”

“Sgt. Briggs not only saves lives, he inspires us all with his compassion and dedication,” says Robert Gebbia, American Foundation for Suicide Prevention director. “He’s a true American hero.”

In March 2005, Kevin Berthia, then 22, a former postal worker who’d battled lifelong depression and was overwhelmed as a new father, was about to jump when Briggs, who happened to be passing by, spotted him.

“I know you must be in tremendous pain,” Briggs told him. “If you want to talk, I’m here to listen.”

It was a life-changing moment for Berthia.

“Sgt. Briggs got me to open up about stuff I’d never dealt with before, like not knowing my real parents,” says Berthia, an adoptee, who now takes medication for depression. “He made me realize we’re all here for a purpose, and life is about finding just what that purpose is. I owe every bit of my second chance to him.”