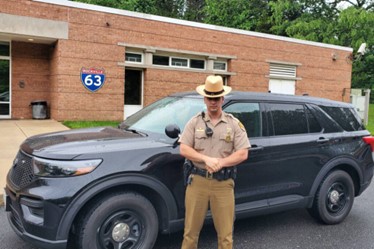 (SILVER SPRING, MD) – The quick response by a Maryland State Police trooper helped save the life of a tow truck operator on Monday in Montgomery County.

Shortly before 10:30 a.m. on Monday, Trooper Jason Reid, who is assigned to the Rockville Barrack,  was on the scene of a motor vehicle crash on the ramp from eastbound I-495 to southbound Colesville Road (US 29) in Silver Spring, Maryland. According to a preliminary investigation, a tow truck operator was on the scene working on removing the vehicles involved in the crash. The tow truck driver, a 51-year-old male, was working on getting a Chevrolet Equinox onto the back of his tow truck.