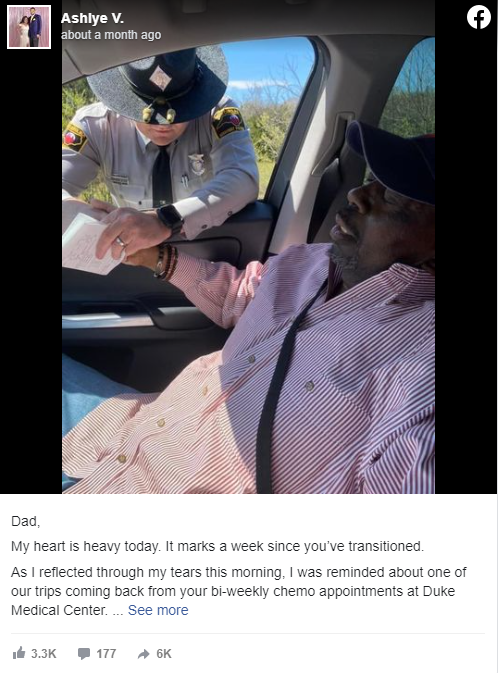 A father and a North Carolina state trooper shared a tender moment during a traffic stop in March, and a photo of the scene has touched countless people.

Dr. Ashlye Wilkerson was returning from Duke University hospital where her beloved dad had been undergoing chemotherapy for his stage four colon cancer when she was pulled over for speeding, WTVD reported Tuesday.

Her father, Anthony Geddis, spoke up and said, “This is my baby girl. She’s driving me back home from treatment, I had chemo,” Wilkerson told the outlet.

However, Trooper Jaret Doty explained, “At that time I knew there is no way I’m writing this lady a ticket. I had to sit in there for a while just to compose myself to figure out what to say when I went back.”

In a social media post on May 29, Wilkerson said when the officer returned to their vehicle, he asked if he heard correctly that the man was battling cancer:

Meanwhile, Wilkerson and her father had no idea Doty had ulcerative colitis. He recently underwent surgery to remove his colon and had only been back on the job a few months.

He then asked the pair if he could pray with them, and according to her social media post, Wilkerson said he gave her father a small silver cross.

Her father passed away in May, therefore, she posted the touching image as a tribute to the two men.

Social media users responded to the photo with heartfelt messages.

“Thank you for sharing this beautiful story in your time of grieving. Prayers for you and your family,” one person wrote.

“Thanks for sharing. Never stop talking about your dad especially the fun and funny times. God will ease the pain,” someone else commented, while another person replied, “Such a sweet memory! Praying.”