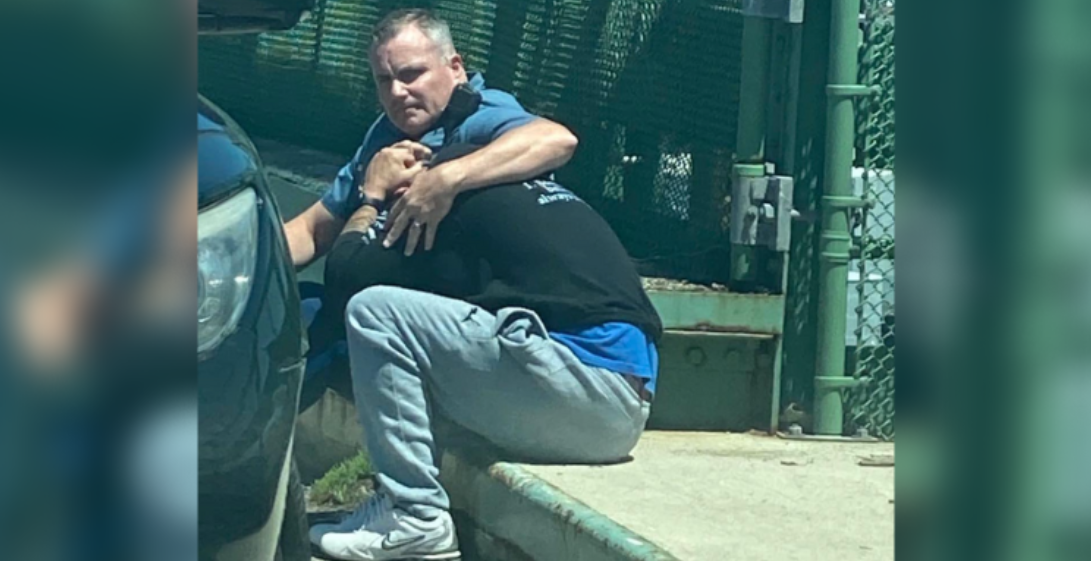 A photo taken by Massachusetts State Police Saturday showing State Trooper Paul O’Connor consoling a distraught man on the Tobin Bridge after successfully talking him out of committing suicide went viral on social media over the weekend.

The photo shows O’Connor with his arm around the man as the two sit on the curb. The man, who has his face buried in O’Connor’s chest, is clearly emotional as is O’Connor.

The photo has been shared nearly 20,000 times with thousands of comments thanking O’Connor and the other Troopers that responded for their care and compassion.

The incident occurred just after noon on Saturday when Troopers from Boston and Chelsea responded to the Tobin Bridge’s upper deck after reports of a man threatening to jump from the bridge.

“Responding patrols reported that the man had crossed over the barrier and was on the edge of the bridge, contemplating jumping,” said the State Police in a statement.

O’Connor was one of the first on the scene and was joined by Sergeant Peter Sennott and Trooper Randy.

O’Connor and the other officers established trust and communication with the man as State Police Marine Units responded to the Mystic River below the bridge.

Then, about a half hour later, O’Connor convinced the man to come back over the fence to the roadside of the bridge.

After the man was safely on the other side of the barriers and no longer posed a threat to himself, O’Connor sat with him and talked to him until EMS arrived.

The man was later brought to a Boston hospital for evaluation. Sgt. Sennott, who is a member of the Crisis Negotiation Unit, rode in the ambulance with the man.

“We wish him recovery and a safe and healthy future,” said the State Police in a statement.

Those responding to the photo on social media were moved to tears.

“This photo moved me to tears,” said Nancy-Jo Webster White. “It’s an amazing photo that captured such an emotionally charged situation.”

Drahcir Sirrah, said, “(This photo) is a celebration of life. He is safe thanks to some very dedicated police officers.”

Stacy Poutas has this to say about O’Connor’s actions, “It takes a special person to save someone with their words. Well done and I hope this gentleman gets the help he needs.”

If you or someone you know is thinking about suicide, please know that help is available. Please call the National Suicide Prevention Lifeline at 1-800-273-8255 or contact them online at https://suicidepreventionlifeline.org. NSPL is available 24/7 and has a dial prompt for the Veterans Crisis Line as well as a Spanish line.