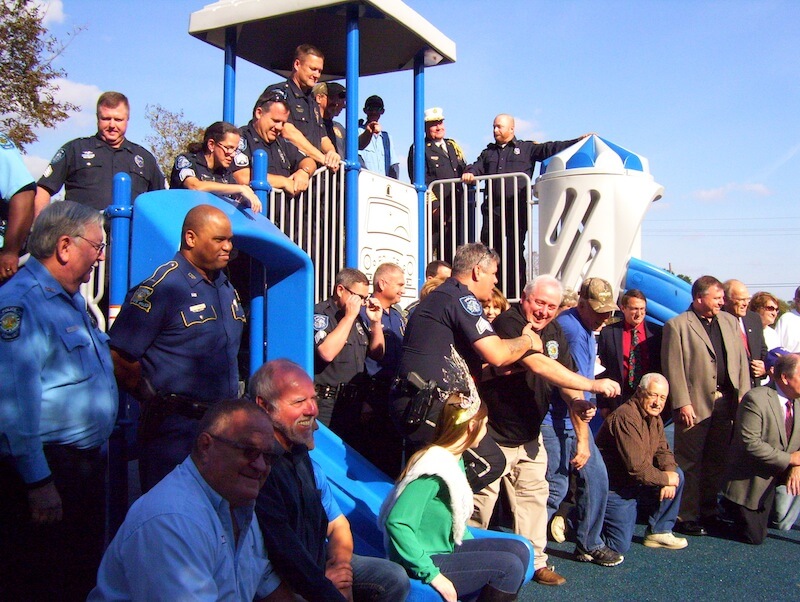 A dedication ceremony took place in the town of Iowa to honor slain Louisiana State Police Senior Trooper Steven Vincent. The playground he grew up playing on with his brothers has received new equipment dedicated in his memory.

The playground equipment is mostly blue and themed around police. Tracey Kincade, of Kincade Recreation-Miracle Recreation Equipment, Inc., brought the equipment and No Fault Industries resurfaced the playground in blue. “We wanted to keep it educational and something to remind kids of the good that our fellow police officers in all forces everywhere are doing, the good efforts, the community bonds that bind. Unfortunately, a tragic accident occurred but out of it came the knowing that we are all here in love and support and together united in the day to day. Steven would agree, and I know he’d be proud,” said Brad Bebee, Public Works Director for the City of Iowa, one of the men heavily involved in the effort.

“Had it not been for Tracey Kincade, the man who approached me with the idea, we wouldn’t be here in honor of Steven and seeing such an addition to our park. The fact that Keith Vincent, Chief of Police here in Iowa, and Steven’s brother, can look out his window and see this as a remembrance is just great,” said Bebee.

“This allows a way for his purpose in life to live on,” his mother said. “I brought the boys here when they were young and they truly had such good times on the merry-go-rounds. To be here today, in honor of Steven, in this very park, I know he’s happy and smiling and cherishing the good times awaiting so many youngsters from up above."