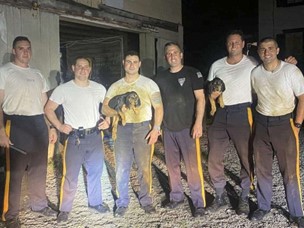 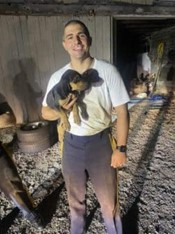 Hamilton NJ, NJ state troopers from Troop “C” Hamilton Station responded to an animal complaint for 3 puppies that wandered off into the woods and fell into an irrigation trench approximately 10 feet underground.

While we do not teach puppy saving techniques in the academy, the troopers created a makeshift catch pole using a mop handle and rope. After hours of effort, the troopers were only able to save two of the three puppies because one puppy got tired of waiting and decided to take a nap. The troopers returned the next day to save the third puppy who was now wide awake and waiting to be rescued.

We were then contacted by Sherri, who wanted to tell the troopers thank you for saving the puppies and that she adopted one and named him Trooper. Sounds like the perfect name to us!

Thanks for sharing the photo with us Sherri and good job by the Hamilton troopers!