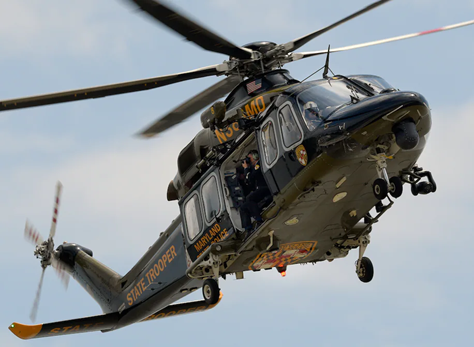 Maryland state police rescued an injured hunter from a remote, wooded section of Howard County, using a helicopter to retrieve him from the ground and airlift him to a hospital.

The rescue took place just after 8 a.m. Friday, after the hunter had fallen between 20 and 30 feet from a tree stand off the Cascade Falls Trail in Ellicott City, state police said in a statement.

The hunter had multiple broken ribs and a possible pelvic fracture, police said.

Howard County first responders determined that an ATV could not make it to the man, so they turned to state police, who dispatched a helicopter rescue crew.

As pilots hovered an AgustaWestland AW139 helicopter 150 feet above the scene, a state trooper, who also serves as a flight paramedic, dropped down to the injured hunter. The medic assessed the man’s injuries and, along with Howard County rescuers, secured him to an extraction platform. The hunter was hoisted up to the helicopter and flown to the Maryland Shock Trauma Center in Baltimore for treatment. His condition was not immediately available on Saturday.