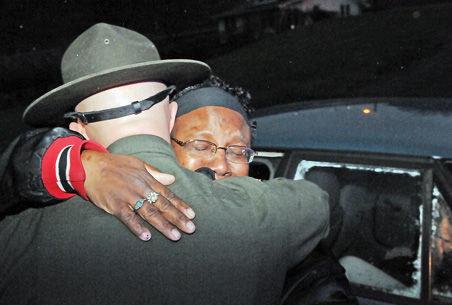 Whited to find people who he thought could really use $100. After about 90 minutes on the detail, Whited was conducting his fourth traffic stop on an older model green Saturn on Maple Acres Road at the entrance to the Maple View Church of Christ.As he approached the driver, Whited used proper police procedures. The exchange between Whited and Michelle Thompson was certainly not a bad exchange.“She was the nicest person I ever stopped,” Whited said. Thompson handed Whited her proof of insurance without him even asking. As he brought her license and vehicle registration back into his cruiser,he was excited by how nice Thompson was. He returned to the vehicle and handed Thompson her license and registration back. She immediately came up out of her seat. “I am truly blessed,” she said as her two children looked on in amazement. “Oh dear God! Thank you Jesus!” She threw her arms around Whited’s neck and hugged him for dear life. She said that her home was recently broken into. “This is for them,” she said, sobbing as she motioned toward her children with the $100 bill in her hand. “This is for my kids.” Whited took Christian’s orders seriously. He searched for people with children riding with them. He stopped a young lady traveling on Athens Road who pulled over in front of where the Vietnam War veterans are selling Christmas trees. “She had just picked up her little sister from day care and was bringing her back home,” Whited said after returning to his cruiser. When he walked back to the vehicle and handed Veandala Coleman the $100 bill. “That’s awesome!” she said. “I’ve never been on the other end of Christmas giving before.” Whited spotted a green Ford pickup truck with a gentleman and two young children in, so he initiated a pursuit. Aaron Summers had just picked up his son and daughter, Mackenzie and Aaron Summers Jr., from a party at school. Aaron Jr., told Trooper Whited that he enjoyed eating pineapple at the party. “I didn’t know why he was pulling me over,” Aaron Summers Sr., said. “I knew I wasn’t speeding.” And of the money? “Every little bit helps when you have two young ones,” Summers said. Leona McCoy was lost, so she pulled up beside Whited who was parked on Stafford Drive, rolled down her window and asked if the trooper could direct her to the old Armory. She had the directions to the Toys for Tots distribution location written on an envelope. Whited served with the Princeton Police Department, so he told McCoy he could lead her there. “She’s going to pick up toys from the Marine Corps League’s Toys For Tots,” Whited said. “I think she could use a little help.”After he got on Mercer Street, he motioned for McCoy to pass him. He followed her for about a half-block before putting his lights on. He approached her, asked to see her license and registration and said he thought her license plate was expired. He returned briefly to his cruiser, but soon returned to give her license, registration and a $100 bill. She emerged from her vehicle with tears streaming from her eyes, and hugged Whited. “It’s just hard to do, being a single mom,” she said. “Mom is trying to help. I love my little ones so much. Oh, my God. Thank you,” she said as she hugged Whited around the neck again. She offered the only thing she could in return. “Come to Applebees, and I’ll do my best to help you,” she said. Sgt. Christian explained that this is the second year that an anonymous donor had given the detachment some $100 bills for the troopers to distribute. Christian said that he didn’t want anyone to know his name. “We don’t even know if he’s from Mercer County,” Christian said. “He just wanted the troops to give people some help for the holidays.”