The holiday season, for most, is a time of joy spent with friends and family, but for some it comes with a painful reminder of lost loved ones. 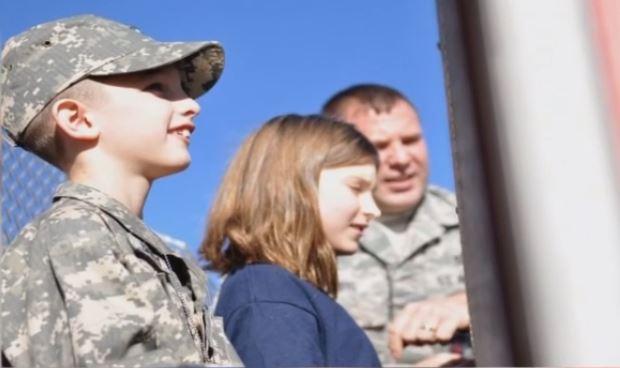 In 2012, State Trooper Marshall Lee Bailey was shot and killed in the line of duty, leaving a family with a gaping hole. And for his seven year old son, Wyatt Bailey, the pain of losing his father hits hard during the Christmas season. So when he asked his mom if he could drive an Army truck for Christmas, the West Virginia National Guard was all too happy to help. When a child has a special wish for Christmas most parents will do whatever they can to make sure that wish comes true. For Wyatt’s mother, Tammy Bailey, her son was no exception. Wyatt's father was a state trooper who was shot and killed in 2012, and for Wyatt not having is father for Christmas has been extremely difficult. "We get a new ornament for his father every year and hang it up on the tree, he got really sad and stopped decorating and we talked about his dad and then later we started talking about what he wanted for Christmas and he started talking about the Army tanks,” Tammy Bailey said.Wyatt’s wish this year was to be in the Army and ride an Army truck; a unique wish that his mother was determined to make happen. "I had posted on Facebook if anybody knew how to make this happen, and a friend of mine Stefany Drake and her husband Jason got it started,” Tammy said.After a few connections, the West Virginia National Guard knew exactly how to make Wyatt’s dream a reality. Governor Earl Ray Tomblin invited Wyatt and his 9-year-old sister, Lauren, to the Capitol to give them a special title. "We made him the national adjunct general of the day and we presented him and Lauren with honorary Mountaineer Brigadier so they are now officially ambassadors for the National Guard every day,” Major General Jim Hoyer said.Wyatt was given an Army uniform and got to ride in military vehicles to the Charleston armory. For the rest of the day, Wyatt was put in charge of the soldiers and airman as they toured the base. For Wyatt and his family, this was the perfect Christmas gift. "I was happy and I was proud." General Hoyer plans to invite Wyatt and his entire school class to tour the base in the near future. Wyatt said his favorite memory from the day was getting to ride in the Humvee.