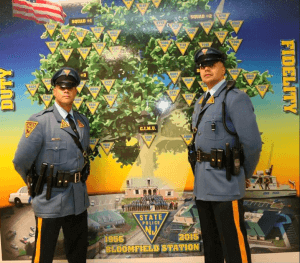 Police released dashcam video Thursday showing two state troopers helping to delivery a woman’s baby on the side of a New Jersey road. A man was driving his wife to the hospital Monday around 4:14 a.m. when the mother-to-be realized she wouldn’t make it, the New Jersey State Police posted on Facebook. The couple then stopped on the shoulder of Garden State Parkway and phoned 911. Trooper II Alex Muro and Trooper Arnaldo Mateo were dispatched and discovered the expecting mother already in labor when they arrived. That’s when the dashcam video began to roll, capturing one of the troopers leaning into the car and offering words of encouragement to the woman as cars sped by. “There we go. One, two, three, push,” he said, then “keep going, keep going.” Cheers can then be heard, and the officers begin to discuss cutting the umbilical cord and locating a blanket for the newborn. In all, the video lasted 47 seconds. Both troopers helped in cutting the cord and cradled the baby girl before handing her back to her mother, according to the department. The mother and newborn were then transported by ambulance to a hospital and were said to be doing well. The incident comes a little over two weeks after state police helped deliver a baby on the same roadway.