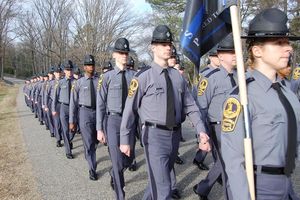 Friday, beginning at 10 a.m., at the state police academy in North Chesterfield. “Law enforcement is one of the most honorable calls to service,” said Col. W. Steven Flaherty, Virginia State Police superintendent in a news release. “Why endure 28 weeks of physical, emotional and demanding academic environment? It’s because the men and women who take the oath have a passion to protect their communities and understand what it means to sacrifice and serve.” A highlight of the graduation ceremony is when the superintendent hands the state police diploma to the new troopers. This year, a dozen members of the graduating class will receive their diplomas from a family member who currently serves or is retired from local, state or federal law enforcement. The graduates hail from all over Virginia and from Maryland, Massachusetts, Michigan, New Jersey, New York, Pennsylvania and one from the Czech Republic. A number of the new troopers previously served in law enforcement, corrections or the military, contributing some 185 years combined prior experience in those fields to the 123rdstate police graduating class, according to the news release. The new troopers started their training last February and received more than 1,600 hours of classroom and field instruction in more than 100 subjects such as crime scene investigation, survival Spanish, judicial procedures, self defense, cultural diversity and firearms. Graduates will report for duty on Monday when the Culpeper division office will gain three new troopers, one in Madison County and four in Albemarle County.