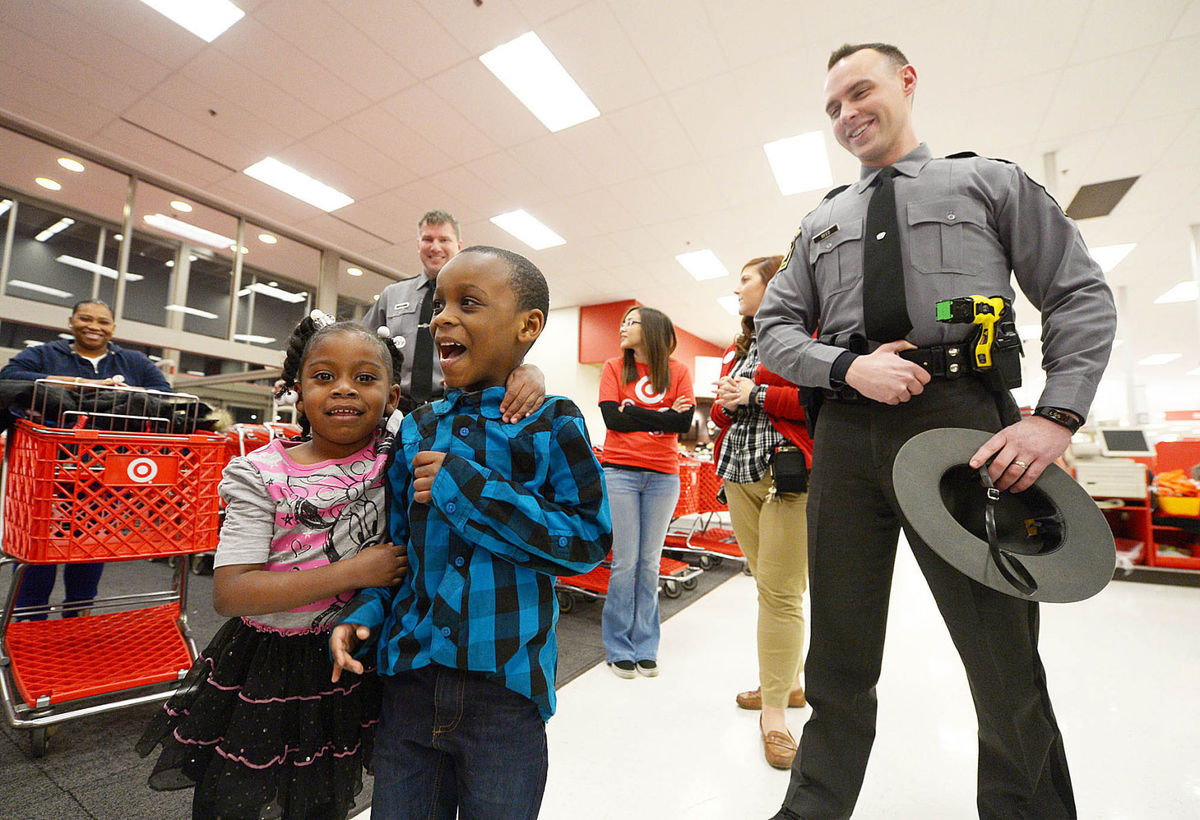 Two-year old JayShaun was having fun Tuesday checking out all the options in the toy department of the Target store just outside Carlisle. His mother, Camren Spahr, looked on with appreciation for the Pennsylvania state trooper volunteering his time to help her child narrow his choices. “It’s amazing,” she said of the Heroes & Helpers program offered by the store chain. “They should do it more often. It allows kids to know that all cops are not bad.” In another part of the store, trooper Krystal Weston of the Carlisle station was busy helping 9-year-old Kennedi Smith pick out a pair of shoes to buy using a gift card provided by the local store. “It’s really generous of Target to donate money to children in need,” Weston said. “I feel privileged they allowed us to take part in it. They have given us the opportunity to make a good first impression on some young kids who never had any interaction with police.” A nationwide program, Heroes & Helpers pairs law enforcement officers with needy children so that together they can form a bond while buying gifts for their families. “We are giving them some money to shop and build a relationship,” said Wei-Fung Chang, assets protection team leader for the Carlisle Target store that donated $600 to children living in the Stuart House. Operated by Salvation Army in Carlisle, the Stuart House is a transitional housing program that helps families coming out of emergency shelters further address the issues that brought them into homelessness, case manager Kristina Kennedy said. Seven Stuart House children were teamed up Tuesday with four state troopers on a mini-shopping spree funded by $60 gift cards. Two mothers also pitched in along with six employees of the local store. Store employees will be buying gifts on behalf of three other children at the Stuart House shelter who are too young to participate in the program but still could use the help. “It’s a great way to combine all the parts,” said Trooper Jacob Fackler of the Carlisle station. “Somebody has a need, somebody can fill it and we are blessed that they can include us in on the interaction and to be a part of it.” “There are a lot of things happening in this world that turns a lot of people against cops,” said Spahr who does not buy into that philosophy. She thought it was really to see police officers in a positive light. Case manager Kennedy was pleased with the timing of the program saying that organizing a shopping spree to benefit children would have been too crazy during the holiday season. “Our families are recipients of a lot of wonderful programs,” said Kennedy adding how Heroes & Helpers allows children to team up with law enforcement to buy necessities that fill in some gaps left behind from other programs. Ryan Loretta manages the stores in Carlisle and Mechanicsburg as the store team leader. He explained how Heroes & Helpers has been around in some form for at least 10 years. Previously, it was known as Shop with a Cop. The goal has always been to combine law enforcement with community outreach to offer a bonding experience for needy youth, Loretta said. He added that normally Heroes & Helpers is done around November or December, but the decision was made to delay the Carlisle program until late January because of the number of Stuart House families involved. “This program helps kids who do not have a lot of clothing and shoes get what they need for school,” said Kendejah Smith, 13, an 8th grader at Wilson Middle School living in the Stuart House.