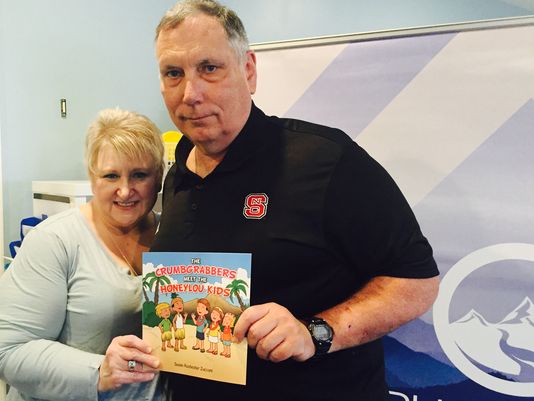 When retired state Trooper Steve Sulligan reflects on his life, he more often than not sees the many blessings. That spurs him to look for ways to bless others, especially children. Recently, Sulligan, owner of Blue Ridge Tours in Travelers Rest found a way to bless children and a former high school classmate who has become an author of children's books. Sulligan purchased 25 copies of "The Crumbgrabbers Meet The Honeylou Kids" a children's book authored by Susan Rochester Zucconi. The books, he said, will be donated to the Shriner's Hospital for Children and the Ronald McDonald House, both in Greenville. The books being donated are of Zucconi's Crumbgrabber series of books for children. Sulligan said he noticed on Facebook that his classmate from 35 years ago had become an author and he contacted her. "I thought it was neat what she was doing," Sulligan said. And the title of the book "grabs your attention. I thought the kids would like it. I liked it." So, Sulligan decided to help Zucconi by buying the books and to help children by donating them. The book donation is just one way Sulligan and his wife, Donna, give back to the community. Sometimes,their Blue Ridge Tour business donates a trip to a school that would otherwise not be able to go on a field trip. "We try to choose a school that we know would not be able to go," Donna Sulligan said. During one of the trips, they learned that some of the children had never seen the ocean, much less put their feet in the water. "That's what it's all about," Donna Sulligan said. The Sulligans also provide scholarships for students who can't afford to take a field trip with their classmates. When the scholarship foundation was launched in 2011, Donna Sulligan said she did not know there would be so many children in need. "We have now tripled the scholarships that we're giving to schools and we're also giving field trip grants," she said. Steve Sulligan, a native of Sayreville, New Jersey who has always loved working with kids, spent 25 years in law enforcement in South Carolina as a police officer and a state trooper. While serving as a state trooper spokesperson in the mid-1990s, he got involved in doing Safety City programs and talks at grammar schools. Sulligan said he was also the only state trooper to teach D.A.R.E. in public schools in Greenville County. Sulligan has also long held a passion for buses. When he was transferred to Greenville as a trooper, he'd just reached the age where he could learn to drive a bus, he said. In 1988, he started Blue Ridge Tours on a small scale to make some part-time money because "being a trooper back then, we didn't make a lot of money." The business, he said, "kind of grew" to now being one of the largest in the Upstate. Ninety-nine percent of Blue Ridge Tours' business is with schools, largely field trips with clients statewide and beyond. The business also drives college and professional sports teams on their road trips around the U.S., he said. Personally, Steve and Donna have traveled all around the world because of the job he's had, he said. "I've been blessed with what I have, that's why I give back," Sulligan said. "I realize that when U take a a group of kids to Washington or New York, that may be the only trip they go on in their life, where I've gone on it 100 times.