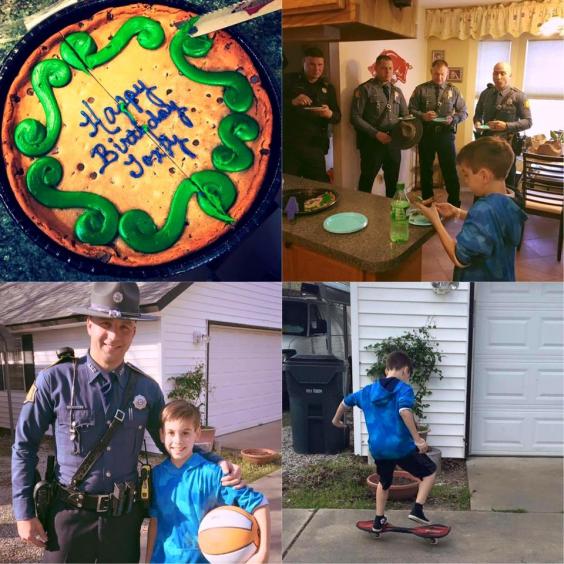 A group of Arkansas State Troopers helped make a 10-year-old’s birthday party a celebration that he’ll never forget. When Toxey invited all 21 of his classmates to his birthday party on April 2, not a single person bothered to show up. “Just heartbroken and helpless. It’s the last thing you want to feel for your kid is that no one cared enough to come,” Toxey’s mother Angela Andrews told local reporters. Two days later, five state troopers and Rhino the police K-9 showed up to the Andrews residence to kick off the public relations photoshoot of a lifetime.  “Not only did they bring him a birthday cookie cake, but they also brought him all kinds of presents, let him play with Rhino, the K-9, and play with the sirens in their cars,” Angela Andrews wrote on Facebook. “They ate his cake with him and played basketball with him, All out of the goodness of their hearts. They made my sweet baby's day, and his year,” she continued. “Thank you from the bottom of my heart. I will never be able to repay the kindness you showed my family today!" Toxey told THV11 that he "cried a little bit," and that he now wants to become a state trooper when he grows up. So let's hope, for the sake of all the minorities in the area, that Toxey's classmates start treating him better so he'll end up becoming one of the good guys.