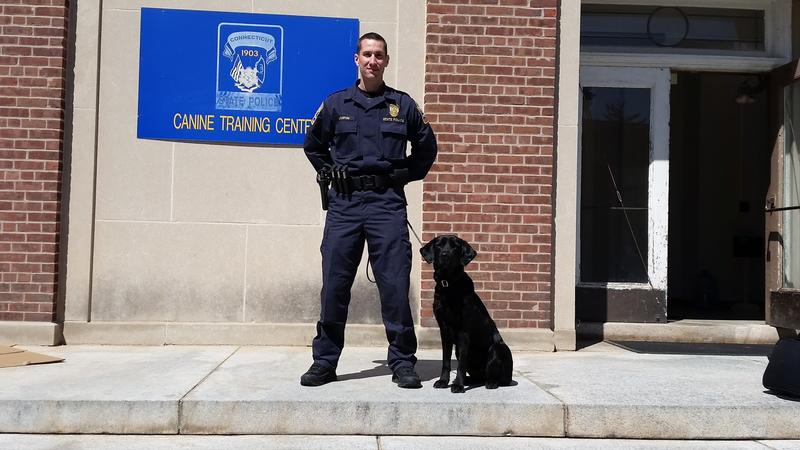 Police dogs are great at sniffing out hidden drugs -- and as more crime goes digital, state police in Connecticut are training canines to sniff out evidence on computers and cell phones. Somewhere stashed behind a long wooden wall, in a dark gymnasium packed with old suitcases, is a hidden computer memory card. It's the kind of tiny chip you'd slip into a cell phone or a digital camera. Selma, a trim black lab with a nose trained to sniff out technology, is determined to find it. She can find things like hard drives, "cell phones, mobile devices -- such as tablets -- and, more importantly, devices such as USB drives or SD cards," said her handler, Detective George Jupin with the Connecticut State Police Computer Crimes Unit. After picking up the scent, Selma zips over to one corner of the gym, and puts her paws up on the wall to indicate she's found the stashed memory card. Jupin said Selma goes out about twice a week to execute search warrants. One time he said police already searched a house, but when they brought in Selma, she hit on a drawer human officers overlooked. Shoved in the back was a digital camera -- and it was filled with pictures indicating a child pornography suspect was doing more than just looking. "You don't have enough time to look at everything, but with the canine, it definitely makes you feel that you've done a more thorough investigation," Jupin said. "Getting into all those nooks and crannies of a house, particularly when the houses are large -- or they're packed with a lot of stuff. It's helpful." Selma was Connecticut's first E-Dog. Since then, state police taught six other Labradors to find hidden hardware. Those dogs are serving at police departments across the country and at the FBI. Trooper First Class Michael Real trains the dogs. Originally, he said they were bred to assist the blind, but didn't make it in guide-dog school, in part, because of high energy and an obsession with food -- bad traits for a seeing-eye dog -- but ideal for a canine in training. "We take these dogs particularly because they have great food drive -- and that’s how they eat every day from the time we get 'em," Real said. "It’s odor equates to food." Selma gets her dinner when she finds a chemical compound surrounding the memory boards of all cell phones and computers. It's put there to help keep the hardware cool. Real said it took about a year to train Selma to find the compound on actual hardware. Now, she can find hidden DVDs and Blu Ray discs, too. Real said the E-Dogs are even alerting to vintage tech -- like stashed-away floppy discs or VHS tapes. "They constantly amaze you with their ability to identify something similar to what they've been trained on," Real said. "It kind of leads us down the path of other things we should be training them on." Detective George Jupin said he's already getting calls for Selma to assist in homicide and fraud investigations. And while bomb-sniffing dogs are already a thing -- Jupin said the next step for Selma might be bomb reconstruction -- using her nose at a blast site to sniff out the scattered components of a computerized detonator.