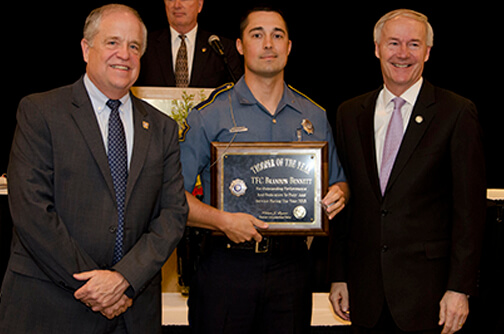 Trooper First Class Brandon Bennett, a seven year veteran Arkansas State Trooper, assigned to Highway Patrol Division Troop C (Mississippi County), has been awarded the department’s Trooper of the Year (2015). The award was presented today by Governor Asa Hutchinson and Colonel Bill Bryant, Director of the Arkansas State Police, during the Annual Arkansas State Police Awards Luncheon. TFC. Bennett was also awarded the Arkansas State Police Medal of Valor.  The honors were awarded for Bennett’s role in the July 1, 2015 apprehension of two Missouri fugitives who had shot a store clerk during a robbery. The arrests followed a pursuit that began near the Missouri – Arkansas border.  The gunmen had already shot at a Mississippi County deputy and TFC. Bennett before the driver of the robbery getaway car lost control and crashed in a Blytheville neighborhood.  Both fugitives fled the area on foot.  TFC. Bennett left his patrol car to assist in the search and encountered one suspect hiding in thick brush.  TFC. Bennett was met with resistance from the suspect who struggled to break-away from the trooper.  The suspect was handcuffed by TFC. Bennett and turned-over to local authorities