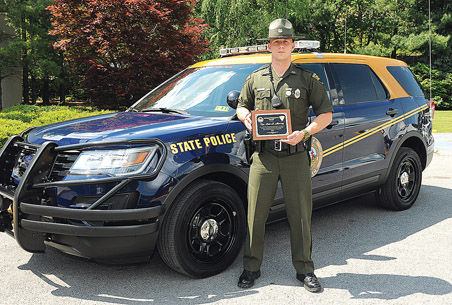 A Bluefield High School graduate whose long-time dream was to become a trooper was recently awarded one of the highest honors from the West Virginia State Police. Trooper D.R. Murray was honored with the prestigious Superinten-dent’s Award at a May event in South Charleston. Murray was presented the award for his numerous arrests and investigations while with the Welch detachment of the West Virginia State Police. During 2015, Murray completed 137 criminal investigations, made 80 felony and 140 misdemeanor arrests, confiscated $2,379,068 worth of illegal drugs and recovered $23,403 in stolen property, according to Welch detachment commander Sgt. C.F. Kane. Murray was also the lead investigator on a high-profile double murder in the Litwar area. “The perpetrator shot them and burned their bodies,” Murray said, recalling the case. “It was a who-done-it murder.” Within 38 hours of the initial call of the double homicide, Murray developed two suspects and interviewed each, Kane said. “One suspect confessed to being the shooter and killing both victims and the other suspect confessed to being present at the time of the shooting. Each suspect was charged with first-degree murder.” Murray credited his fellow troopers for their hard work on the double homicide. “Everybody at the Welch detachment worked wonders on that case,” he said. He also acknowledged the Welch troopers for their role in his achievement of the Superintendent’s Award, and spoke of the tight camaraderie at the McDowell detachment. “I would not have been able to get this if not for them,” Murray said. “This is not only my hard work, but their hard work. They’re legitimately why I got this award. They deserve it just as much as anybody does.” Detachment commander Kane said it was “a pleasure” having Murray work under his command. “He’s a well-rounded trooper,” Kane said. “The state of West Virginian and its citizens are lucky to have a man of this caliber in uniform.” Murray previously worked with the Bluefield and Princeton police departments, and served 10 years with the National Guard. He was deployed to Iraq from 2009 to 2010. However, serving as a West Virginia State Police trooper has always been his life-long goal. While a junior in high school, Murray was assigned to write a letter to his then-teacher, Kim Miller, wife of State Police Princeton detachment commander Sgt. Doug Miller, about his career aspirations. Kim Miller kept the 2004 letter, and shared it with the Daily Telegraph. “The thing that influenced me was the time that Trooper Doug (Miller) came to school and I went with him to his State Trooper car ...,” Murray wrote. “This is when I knew I wanted to be a State Trooper. This is what I am going to be, and this is what I want to be. Thank you.” In honor of receiving the Superintendent’s Award, Murray was presented with a 2016 Ford Explorer cruiser and a plaque that reads, “In recognition for positively representing the ideals of the Department by consistently performing their duties with outstanding skill, diligence, productivity, judgment and responsibility.” The State Police Welch detachment has a long history of award winners. Commander Kane is the only two time Medal of Valor honoree in the state. He earned the awards for an attempted rescue of a man in the Guyandotte River and the rescue of individuals during a fire at the Tyson Towers apartments. Sgt. J.S. McCarty was also awarded a Medal of Valor for his actions during the Tyson Towers fire. Trooper J.R. Coburn, also of the Welch detachment, earned a Medal of Valor for his actions in stopping a subject who was preparing to shoot a law enforcement officer in Mercer County. Murray, who was assigned to the Welch detachment upon his completion of the State Police Academy in 2014, has recently been reassigned to the State Police Monroe County detachment at Union.