A survivor and a 'fighter,' state trooper Sayeh Rivazfar shares her story of overcoming horror to reach her goals

Throughout her life, Sayeh Rivazfar says, people have told her she's a survivor. 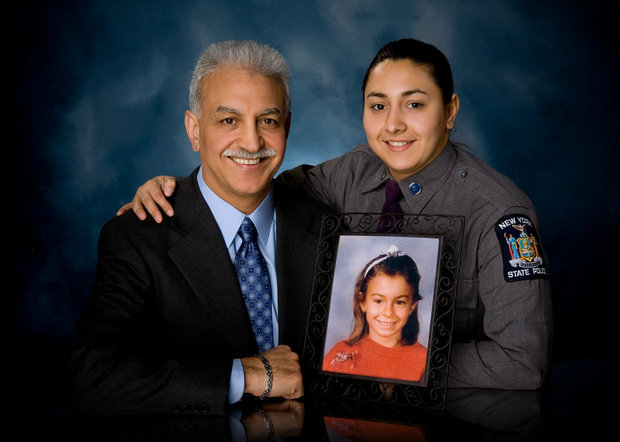 through the customer-supported Share a Bear program. The bears will be placed in patrol vehicles to help comfort children who have experienced traumatic events. University Store Director Misty Eaton says the program began back in November and has seen great support from customers and the community. “The program allows customers to purchase a plush teddy bear at checkout and donate it back to the store,” says Eaton.  “The University Store then collects all the bears and donates them to the Wyoming Highway Patrol Association.” “These bears provide a lot of comfort to those children in one of the most difficult times in their lives,” says Wyoming Highway Patrol supervisor Lt. Michael Simmons. Eaton says that the University Store plans to bring the program back during the next holiday season. “At this point in time we have a few bears left,” says Eaton. “We were really excited to partner with the Highway Patrol Association, and hope to continue the partnership.”

with a $500 donation. Since he was diagnosed with Burkitt leukemia in July, 5 year-old Cohen Smith has endured six chemotherapy rounds at Mayo Clinic in Rochester to battle the aggressive cancer. When his story came to the attention of troopers at Mason City’s post, their union unanimously voted to give their yearly $500 charitable donation to his parents for medical and travel expenses. Two troopers surprised the family with the check at their home on Thursday morning. With a bald head, clad in a red GAP sweatshirt and Teenage Mutant Ninja Turtle pajama pants, Cohen was subdued by the unexpected attention, clinging to his mother as cautiously gave one trooper a high-five. “It breaks your heart,” said Trooper Keith Duenow afterwards. He hoped “maybe it makes a little bit of an impact.” When Cohen started complaining of stomach pains and flu symptoms for about a week last summer, his parents Steve and Brenda Smith took him to Iowa Specialty Hospital in Belmond, thinking he had a gastrointestinal issue. Doctors told them he might have a twisted intestine. None of their four older children have had any serious health problems. The cancer diagnosis at Mayo was a shock. “Some days are good and some days are bad,” Brenda said of her son. “He very rarely complains about not feeling good.” Since July, she has given up her daycare business until at least the spring to take him up to Rochester every two weeks for appointments. When he goes through chemo, they are typically in Minnesota for three to five days at a time. In September, daycare customers and church friends held a benefit that raised several thousand dollars for his cancer costs, she said. Cohen is currently in remission, but has two chemotherapy rounds left, and will subsequently be checked for cancer every year. “We just left it to God, it was really out of our hands,” Brenda said. As the two troopers left her son with a patrol hat, badge sticker, temporary tattoos, coloring books, and stickers, she said he was normally an outgoing child who likes to play outside and loves watching “Paw Patrol” cartoons on television. He wants to be a firefighter or police officer when he gets older. She couldn’t guess how much the final bill will be for his cancer treatments, she said. The $500 check the troopers left will probably be used for gas expenses to Rochester. Dealing with pediatric cancer has reset some of their priorities, now more grateful for the time they spend together, especially at Christmas. “The kids could have had nothing under the tree and all of us being together would have been plenty,” she said. And, enjoy every moment: “Life is just too short to do anything less than that,” she said.

A little boy got a special gift this Christmas from an Ohio State Trooper who made a big impact on him earlier in the year.When two-and-a-half year old Jibsen’s grandmother, Linda Miller, was pulled over by trooper Adrian Wilson several months ago, the little boy was scaredbut the trooper managed to comfort him. Wilson made such an impact on the child that the little boy dressed as a trooper for Halloween. The boy’s mom, Natalie Miller-Stulley, told INSIDE EDITION: “This little act of kindness before he allowed his grandmother to pull away was much appreciated. Taking a few extra seconds to make this little guy more comfortable in an uncomfortable situation certainly has allowed Jibsen to see the positive side of law enforcement rather than only a negative.” She added: “Unfortunately, too often here lately law enforcement is getting negative media attention so I was just hoping to share some positive light here locally for these men and women.” According to Natalie, her mother wrote a letter to commend Trooper Wilson for his kindness. Just in time for the holidays, Trooper Wilson stopped by the boy’s house to deliver a special gift – his own police car. “When I told Jibsen that Trooper Wilson would be visiting, he immediately wanted to put his costume on for his visit. We appreciate Trooper Adrian Wilson going above and beyond as do we appreciate all the other men and women in law enforcement,” Natalie said.

Story courtesy of Inside Edition. 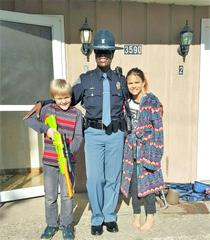 As an Indiana State Trooper, Nicole Cheeks has seen it all. “Sometimes our jobs, it gets nasty,”said Cheeks,“But for the most part we’re dealing with 90 percent of good citizens out here. We prepare for the worst, but we usually end up getting the best.” Cheeks often patrols different parts of Terre Haute. It was in one of her neighborhoods that she met Jennifer Diekhoff and her children. “They’re good kids, they’re smart kids,” said Cheeks, “They introduced me to some things in Terre Haute that I wasn’t aware of.” One of those things being Shop With a Cop at Meijer, which happened in the middle of December. Cheeks says Diekhoff’s kids, Brandon and Hailee, told her about the event, asking her if she could be their shopping partner. However, the day of the event, the children were unable to attend. “They were really bummed out about not being able to go,” said Cheeks. Cheeks and her husband went back to Meijer following the event, picking up toys and toiletries. On Christmas Day, Cheeks delivered the load of gifts personally to the Diekhoff household. “I figured I could give back to them just for helping me,” said Cheeks. Watching the smiles of her children, Diekhoff says this Christmas is a dream come true. “It’s a blessing,” said Diekhoff, “I can’t even express how grateful we are, you know, it’s a Christmas miracle.” For 8-year-old Brandon Diekhoff and his 11-year-old sister, Hailee, it’s an experience they will always remember. When asked what they were going to say to Trooper Cheeks, in unison they said, “Thank you! You’re amazing.” In the midst of all the excitement and gifts, Cheeks hopes the Diekhoffs will unwrap the life lesson of paying it forward to others and helping those in need. “When those kids get older, they’ll do the same thing,” said Cheeks, “They’ll remember when ‘I wasn’t able to do something, someone stepped in and helped us out’ and they’ll continue to do that.”