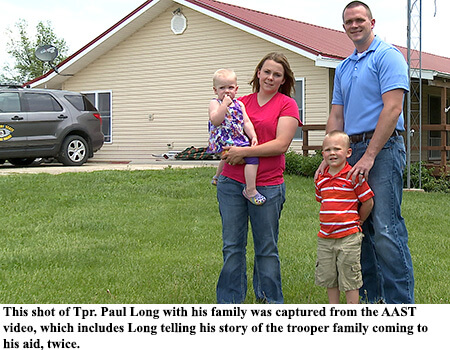 The three-minute video tells the benefits of AAST membership – scholarships, the Trooper Connection newsletter, members’ educational reimbursement, and membership in the Professional Law Enforcement Association – but it is the story shared by Tpr. Paul Long that personifies brotherhood in the state trooper family.

Paul lost his home to a house fire in 2012; he and his wife and children evacuated before the house was engulfed in flames. AAST notified its member troopers, who sent checks from around the country, in addition to the brotherhood assistance donation by AAST, to help the Long family with expenses that continually mounted.

Then in January 2014, Paul’s young daughter was diagnosed with an inoperable brain tumor. Again, AAST members sent donations to help the family with ancillary costs. They also sent notes of encouragement and they prayed for the Long family.

AAST notifies its member troopers when an extreme need arises in the trooper family; troopers are united for a common cause – helping a brother or sister who is facing tremendous adversity.

Paul tells his heart-rending story in the video, with his family also pictured, emphasizing how his brother and sister troopers sent help when he needed it most.

As he states in the video, “The AAST brotherhood and camaraderie showed itself again. They (troopers) were quick to send donations and help me out with medical expenses, travel expenses, basically everything we needed.” 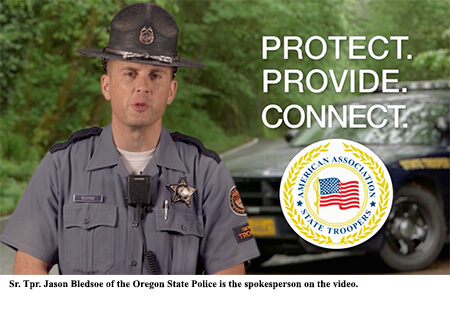 AAST is the strength of the Thin Blue Line, offering opportunities to bond state troopers, regardless of state lines. Through the years, AAST has provided real support to state troopers, and the tradition continues as AAST celebrates its 25th anniversary.

“The family of troopers never ceases to amaze me,” said Capt. Tim Baysinger, AAST’s Missouri state director. “The brotherhood of troopers steps up to help when they learn of a trooper in need. Connecting troopers to each other is a primary function of AAST, linking troopers to allow the trooper family to work together in times of need.” See the video here: www.youtube.com/statetroopers1.